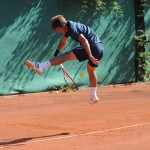 I got a chance to have a chat with ATP pro Julian Turosienski after reading a great article he wrote on medium.com about how becoming a professional tennis player prepared him to start a business.  His app http://fitbenefitapp.com is designed to help people find personal trainers in their area!

What struck me was how this talented young man from Poland has not only made it to the highest level in tennis, but how well spoken and how respectful he was.

Here’s a transcript of our conversation:

Q. You said you started playing tennis at 4 years old, what was it about tennis that drew you to it?

A. I came across tennis completely by accident! At the time when I was 4 years old, I was living in Sarasota, Florida. There was a local club in the area that my parents played at. One day, when I was bored, I decided to pick up a racquet that was almost bigger than I was and I haven’t stopped since! I was surprisingly good as a beginner, that helped a lot.

A. That’s definitely a difficult thing to balance. When I practice I have certain goals for a tournament or from a previous tournament that I am working on. To keep things fun I love to play practical jokes on some of my fellow practice partners or making bets on certain things like points or sets during practice. The best one to date was when I was in Osaka, Japan and I had lost a bet that during practice I would hit a certain amount of targets while serving. Our hotel was an amazing 5 start hotel with a Michelin starred  sushi restaurant, so naturally our bet was that whoever loses has to wear a scuba diving mask and scuba diving flippers to dinner. I lost that day, so I walked into the restaurant, everyone there was very dressed up since it was a very well regarded and upscale place, and I casually walked in, dressed in diving attire. About 15 minutes later the manager asked me to change out of my outfit because I was making the guests feel uncomfortable, little did I know the Prime Minister of Japan was there eating with his family. True Story!!

Q. Oh man! That’s awesome… reminds me of the time I bet my girlfriend I’d hit more targets than her in a game of mini tennis.  She’s like a pit bull when it comes to competition.  Needless to say, I was buying the steak that night! Who were your favorite tennis players to watch, growing up?

A. I would definitely watch a lot of Agassi and then Federer. They are both very different players but are such great role models and ambassadors to the sport.

Q. Do you have any rituals that you do before a match?

A. I have some weird rituals, everyone has them, but it’s important to have them! I usually re-grip all of my rackets, then make a mix of electrolyte and carbohydrate drink and pour it into 3 separate bottle, and label three bottle, Set 1, Set 2, and Set 3. Mentally I’m always prepping for my match, I like to visualize some basic things like returns, or serves for example before I go to sleep. Then right before the match I warm up with some elastic bands and sprints so I’m already sweating before I step onto the court.

Q. Cool.  I think Nadal does something similar with drinks, so you’re in good company, but he has to have all of the labels facing the same way.  Crazy! How about after a point, when preparing for the next one?

A. Good questions! The thing is after a point is done, it’s done! There is no going back, it doesn’t matter wether you hit a shot between your legs or double faulted, it’s over and the only thing important is what’s happening right now. A lot of younger players don’t understand that, they get too caught up in hitting it out or making a silly mistake. It happens! Move on. Look at your strings, take a deep breath and focus, thats it!

Q. Well said, I just made a video about this, and it’s so true! What about music? What do you listen to before a match, or in general?

A. I like to listen to AC/DC “back in black” that’s always a good one, and then I’ll listen to Arnold Schwarzenagger’s “6 rules of Success” those always get me pumped up before a match.

Q. I love those guys too… I still remember watching Arnold’s “Pumping Iron”… great motivation. So, if you could meet one person and have lunch with them, who would it be?

A. Only picking 1 person is tough! I would have to go with Tony Robbins, a lot of people know him as this motivational guru/ life coach. He’s been around for a while and knows a lot of people and I would love to get a chance to get inside his head. Also he seems like a really good person to be friends with!

Q. Yes!  Tony is awesome.  I listen to his stuff regularly.  His energy is incredible! Getting back to tennis, what would you tell a player who really wanted to improve his/her game?

A. I get asked this question a lot, and I always seem to have the same answer. The drill or stroke that you least like, is probably the one you need to work on most. A lot of players say to their coach that the drill their doing sucks, most of the time it’s the player that sucks and has a bad attitude towards practicing! Practice, practice, practice. There is no shortcut, I have seen players that have really not been talented in any way, and all of the sudden I see them 2 years later and their kicking ass. The second piece of major advice I would give is to try not to be the king of your own playground, when your young the best thing you can do is while your practicing during the week is to get experience playing matches and points on the weekend, that’s a huge mistake I’ve made before is focusing too much on improving just in practice. The third and final piece of advice is to just grind, tennis is a marathon not a sprint so if it’s not working out right now, be patient, everyone has their moment of glory, just not a lot of people are willing to put in the time and effort.

Q. What are your tennis goals?

A. I’ve taken a short break from tennis at the moment to go to New York because I am launching my start up. So the short term goal would be getting back into training 4-5 hours a day, playing in futures, challengers and building up my ranking. Long term, playing the grand slams and winning one, especially Roland Garros has always been a dream of mine.

Q. Awesome. You mentioned launching your start up, what other plans do you have for after tennis?

A. Yes I’m actually on my way back from New York, I’m launching an app for on demand fitness trainers this summer. Currently I’m looking to keep launching new businesses and learning more, gaining more experience, and after that doing my own angel investing or starting a VC firm. I would love to write a book and put out content, I think I have a lot to say and I would love to get the chance for people to be able to hear it.

Q. Great, because hopefully a lot of people will be reading this! Last question for you Julian, if you could choose one superpower, what would it be?

A. Probably the ability to have an infinite amount of energy and focus, I would love to be able to be up 24 hours a day hustling and having fun. I love what I do, however sometimes my body doesn’t. I may be 20 years old, but apparently at 20 your body still needs sleep to function!